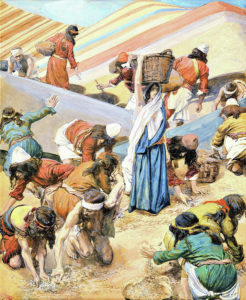 As the Church has given us these wonderful readings about the gift of the Bread from Heaven, we will take the next several weeks to share about this gift of infinite value. Last week it was mentioned that there are two trajectories concerning bread in the earlier Scriptures. One concerns the various bread miracles that occur for the Chosen People, the first being the manna from Heaven, but then subsequently different multiplications and gifts of heavenly bread. The other concerns the bread of the Presence, the showbread which is placed on the golden table set before the Ark of the Covenant. That holy bread, made of twelve loaves for the 12 Tribes of Israel, is a holy offering constantly set before the Presence of the Lord. The significance of that bread offering is demonstrated by the fact that when the Holy One of Israel is giving Moses the directions for the furnishings of the Tent of Meeting, it is the golden table for the bread that is the second thing described, only pre-ceded by the description of the Ark of the Covenant itself. This is a great foreshadowing here of the Holy Sacrifice of the Mass, with our Altar holding the Bread of the Presence before the Tabernacle of the Lord. The last fixture described for the interior of that Tent of meeting was a light that was to be kept ever burning in the Presence of the Lord, even as the light ever burns in our sanctuary before the Presence of the Lord! We hear in the first reading Moses announcing to the People, after the fall of the manna, that This was the miraculous bread that was to feed them during their time of wandering until they enter the Promised Land, when the manna stops. But the bread miracles and the bread of the Presence were all meant to prepare the people for the ultimate bread miracle, the Eucharistic Lord Himself making Himself present to His People for all time. Jesus Himself announces to them the astonishing proclamation that He Himself is the living Bread come down from Heaven. As the Gospel for next Sunday will show, this announcement was not met with approval for it struck the people as an impossible thing. They knew Jesus, Who He was (or so they thought), where He had come from, etc. How then could He be the living bread come down from Heaven? The fullness of this mystery is revealed at the Last Supper itself, when He consecrates that bread with the words that will forever enshrine the reality: “This is My Body….” At that moment, the truth of the Gospel we heard this morning is communicated to the Apostles, and they grasped how He could in fact be the living Bread come down from Heaven. The Church has acknowledged His Presence in the Eucharist from the beginning, and made this infinite gift available to the People of God, even daily. The Church teaches that the Holy Sacrifice of the Mass is the source and the summit of our lives as followers of the Lord Jesus. Her care for the Mass is one of the most crucial aspects and most sacred duties of the shepherds of the Church. This is why when, under the inspiration of the Holy Spirit, Pope St. John XXIII called the Second Vatican Council, prayerfully reflecting on the Holy Sacrifice of the Mass was the first order of business of the Council itself, leading to the Constitution on the Sacred Liturgy, SacrosanctumConcilium, being the first docu-ment produced by the Council Fathers. In it the Fathers of the Councilthe Bishops assembled from the entire worldset forth a series of principles that were to be used to renew how the Church (in the Latin Rite) celebrates the Holy Sacrifice of the Mass, with one of the goals being, as the Fathers taught, a desire “to impart an ever increasing vigor to the Christian life of the faith-ful.” (SC, #1). If we are to experience that intended vigor, we need to understand the principles so that we can cooperate with this move of the Spirit. We will spend some time examining those principles in the coming weeks. - Fr. Ed Fride
Read this Week's Bulletin
Listen to our Podcast