“Rise up in splendor, Jerusalem! Your light has come, the glory of the Lord shines upon you.” 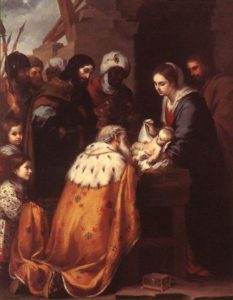 Regardless of whatever else is going on, that Scripture above is true:  the Light has come, the true light that enlightens every man and woman has come into the world. The blessing is that, to those who received Him, He gave power to become children of God. The sad thing is that, as the Scripture says, there were many who did not receive Him as well.

Among those who did are the Magi, the pagans, who came from afar to see the wonder of the Infant King. They saw the Light from afar;  they and others saw the Light close up when they came to Bethlehem. Perhaps they were even able to see something of the Light that shines on the Face of the King as He lay in that manger.

At the same time, the next verse of that passage from Isaiah is also true:  “darkness covers the earth, and thick clouds cover the people.” What is that darkness today? The same as it has always been, the darkness of fear, ignorance, hatred, unbelief—all the darkness that has been with us since the Fall.

The Lord Jesus’ response to that darkness was two-fold. First, the greatest response was that He Himself came into the world as its Light! The second is that He has called and empowered His People to also be the Light:  “You are the Light of the World,” He reminds us. He has given us the antidote to the dark by bestowing on us not only Light, but Flame, the living Flame of His Holy Spirit. Even as those flames danced around the heads of those in the Upper Room, so that very same flame is burning in our hearts as we, too, have received that Holy Spirit!

The first thing Scripture speaks of as being created is the Light, the Light of the First Day. This Light was not the light of the sun, the moon, or the stars;  their light would be days later. This was a heavenly Light. The Jews believe that that Light continued to illumine all creation until the moment of Adam’s sin, when the Light went out. Imagine the shock to Adam and Eve when that happened. Now there was darkness present because they had chosen the darkness and their choice extinguished the Light. There is a legend among the Jews that when Adam and Eve were being expelled from the Garden their despair was almost too much to bear, so the Holy One of Israel gave them a gift, a gem in which had been captured some of that Light of the First Day. When they looked upon that Light, they received a renewed glimmer of hope. (Opinions vary somewhat, but I believe that this legend of the Light of the First Day being captured in a gem was the basis for Tolkien’s Silmarils.)

The good news, literally the Good News, is that we have been filled with His Light and His Life and the power of His Holy Spirit! It is good to remember this when it seems like the darkness is beginning to encroach too much on our lives or the lives of the people we love! We never have to yield to the darkness because He Who is the Light is always with us. Tolkien portrayed that and it is shown in the movie when Frodo has the Vial of Galadriel, in which was captured some of the Light. There is a scene when Frodo is confronted by a dark power. As he holds up the vial, it is as if Another is speaking through him words of power and victory, and the Light begins to blaze even more brightly.

The Other is also present in us, and when we allow Him, the Spirit of God, to speak through us, especially in the gift of tongues, we can cause the Light to shine even more brightly and vanquish the darkness. The Epiphany literally means “to shine upon”;  it is a reference to the Light of the Star that guided the Magi. It is a greater reference to Him Who is the Light Who shines on us and in our hearts. When the darkness threatens, we need not cower before it, we just need to call on the Light and let the Fire burn within us! Even so, come, Lord Jesus, come! — Fr. Ed Fride