“The days are coming, says the LORD, when I will fulfill the promise…” 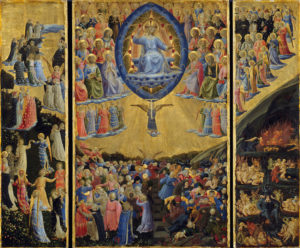 Jeremiah spoke these words to the People of Israel five hundred years before they were fulfilled. The Holy One promised them that He would “raise up for David a just shoot.” Centuries after that prediction, the One comes Who was acclaimed as the Son of David, the Messiah.

When He came, there were many who acknowledged Him, having heard His Word and seen His miracles. There were also many who rejected Him, because He was not doing what they most expected the Messiah to do: restore Israel to freedom and prominence among the nations. As the currently being discussed Book of Revelation shows, that aspect of His Messianic identity is an event in the future. We often ask, “When will that be?” So too the Jews listening to Jeremiah must have had the same question, wondering when that just shoot would be raised up.

The temptation, when the predicted actions of God don’t take place, or at least don’t take place according to our timetable, is to lose hope. In these days, that can be a constant battle: we face so many challenges to our faith that it is easy to lose hope. This can also lead to a loss of faith, as we ask ourselves, “If what I hope for doesn’t happen, maybe it was just wrong to believe in Him and trust Him in the first place?” How many times have we trusted in Jesus to do something, or at least hoped that He would, and it didn’t happen? How do we respond to that?

The risk we constantly face is that every time something like that happens, we are tempted to trust Him less. The consequence of trusting Him less is that we tend to take back more and more control over our own lives, reasoning understandably but wrongly if I can’t trust Him, I’d just better do it myself. The irony is that the more we decide “to do it my way,” the more we close the door to His action in our lives and we really do end up “on our own.” This is the ultimate goal of spiritual warfare in our lives: to have us surrender less and less to the Lord Jesus. This was the goal that was achieved in the Garden itself. Eve was told she was wrong to trust God and that she would be better off if she just did things her way. This resulted in the cataclysm that has marked our fallen history ever since that fatal mistake.

The father of lies is best vanquished by utilizing the truth, even as the Lord Jesus responded to the temptations in the desert by calling on the truth of the Word of God! This can pose a huge challenge, especially when the confusing and difficult circumstances we find ourselves in can seem to suggest that it is wrong to trust Him. “I trusted Him and look what still happened” can easily be our response to some of the hard things we face. How can I believe that “all things work together for the good” when the circumstances seem to be screaming just the opposite? The real question is, how can I deal with this spiritual warfare in a way that results in my growing in my trust of the Savior Who loves me, despite the circumstances to the contrary?

That first Advent was a season for the Chosen to grow in hope as their Messiah was coming. Our current Advent is no less an invitation for each of us to grow in hope as well. To facilitate that, during this Advent we will be looking at how we can protect our relationship with the Lord Jesus, especially our ability to trust Him, during these difficult times. The key is to remain grounded in the Word of God, but also key is to identify the spiritual attacks against our beliefs so that we can respond. The alternative is that sometimes we are defeated because we didn’t even know we were being attacked. Growing in our discernment, our awareness of the battle we’re in, will be key to walking in the victory He has for us! Come, Lord Jesus! – Fr. Ed Fride