“…then, strengthened by that food…” 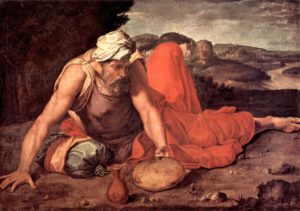 Here we see the great hero of Mt. Carmel, whose amazing actions in calling down fire from Heaven in his contest with the pagan priests has restored the faith of the Jewish people. But what happens next? He is threatened by the pagan queen, and he flees into the desert, where he seems to give in to great discouragement. An angel is sent to him, who brings him a meal of bread and water. But it is a very special bread, a bread that, after he eats it, so empowers him that the Scripture records that, “strengthened by that food,” he walks 40 days and 40 nights.

This bread miracle of the earlier Scriptures was not only for Elijah but is meant as a lesson for us. The point being that, even though it probably just looked to Elijah like ordinary bread, it contained far more power then he could possibly be aware of, power to give him strength to walk, day and night, the great distance to the Mountain of God. The primary lesson of this bread miracle for us is that, even though it may be under the appearance of ordinary bread, the Eucharist contains more power than we can possibly imagine, because it is not simply bread, it is the Lord Jesus Himself.

What if Elijah had simply looked at the bread and then left it alone? When one is given as great an invitation as he received, one must respond. One must do what our Psalm invited us to do: “Taste and see the goodness of the Lord.” We are always given an invitation. That invitation must be responded to in faith; we ask the King of Kings to reveal Himself to us, that we might fully embrace what He has for us. Do we long to be miraculously “strengthened by that food”? Do we believe that He can touch us and empower us as we receive Him?

We must avoid falling into the familiarity trap that some of the Jewish leaders fell into. They thought that they knew Him, knew all about Him: “Is this not Jesus, the son of Joseph?” They in fact were closed to the reality of Who He really was and what He could do and, sadly, what He would have delighted to do for them.

Do we fall into the same trap? Are we so familiar with Communion and receiving Him that we don’t expect anything from Him? Do we play the “nothing ever happened before” game with the Eucharist? Every time we receive, He changes us, He brings us closer, He fills us with grace. He gives us that very life that He promises. Are we open to that? Or are we like the people of Nazareth who thought they had Him all figured out, so He “could work no major miracle there”? What more does the Lord Jesus want to do in us when we receive Him? How much closer does He want to draw us into His very Sacred Heart?

Do we prepare for this most crucial encounter with prayer and study? Are we pleading with the Holy Spirit to give us ever greater expectation of His moving in our lives? As the great saints have told us, repeatedly, He always wants to do more! That “more” requires our full, active, conscious participation, not being passive bystanders but active seekers. The King has pursued us all our lives; now He comes to us in this amazing, miraculous form of Bread, the true Bread come down from Heaven. He draws us into the great mystery of His saving death on the Cross, as the true Passover Lamb given for the life of the world.

Our Holy Sacrifice of the Mass participates in the infinite gift of His saving death. But He was not satisfied with dying and rising for us: He longs to have an active role in each one of our lives! He wishes to empower us, so that we too could walk 40 days and 40 nights to the Mountain of God, whatever that Mountain is in our lives. He proclaims to us, with the voice of Truth, that blessed are those “who take refuge in Him!” The God of the Universe, the King of Kings and Lord of Lords, wants us, wants to be more and more part of our lives, wants us to truly “taste and see the goodness of the Lord!” Let us prepare our hearts, every day, for a deeper and deeper entry into us of the King, Who stands at the door and knocks, longing for us, out of love! Even so, come, Lord Jesus, come! – Fr. Ed Fride