“The Lord upholds my life.” 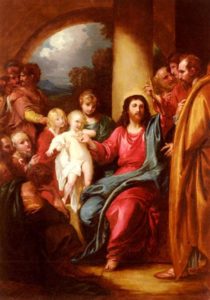 The first reading describes a very interesting scenario. The ones who are just, who are trying to follow the Lord, who are trying to do the right thing, are a target. They are targeted for two different reasons. 
First, even though the popular dictum is “live and let live,” that is rarely followed and usually only when the behavior or the belief is not something significant. Are you a roller or a squeezer of the toothpaste tube? And, of course, the marriage wrecker: which way do you mount the t.p. roll??? But seriously, the more significant or important a behavior or a belief is, the less likely divergent positions will be tolerated.

In the first reading, the issue is that the behavior, the way of life of the just person, is an implicit condemnation of those who choose not to live in the right way, even if he doesn’t go to the extent of the person the reading describes, who actually “reproaches” or “charges with violations.” The message is that his way of life stands in contradiction to the lives of others and it is so much easier, rather than changing one’s life, to simply shoot the messenger.
But the second reason the just one is attacked is a more crucial one. If he is attacked and retaliates, then he discredits his message, and that message can be ignored. But if he is attacked and responds with charity and gentleness in articulating the truth, then the message is not discredited and therefore must be more thoroughly considered, i.e., “let us put the just one to the test that we may have proof of his gentleness.” In my experience, there have been attacks in which the real reason was a small and hidden hope that the attack would fail and the attacker would be able to find something that they desperately were searching for: something to believe in, something to guide their lives. It can greatly assist in weathering such attacks if we realize that sometimes that’s the motive behind the attack.
On the other hand, often the attack is just to shoot the messenger and so eliminate the message. When it comes to matters of consequence, allowing for or tolerating differences of opinion is a very complex thing. The old slogan about “hate the sin but love the sinner” might be recast as “hate the heresy but love the heretic,” to overstate it for the sake of the point. There are two issues with this. 
First, as is often the case, complex behaviors and social situations do not always easily reduce to clear cut responses. On the one hand, issues like abortion are clearly addressed by the Magisterium of the Church as always and without exception wrong. But, on the other hand, sometimes very pertinent issues seem to be addressed by different Church leaders in which attempting to determine the truth is very difficult, e.g., masks, border control, vaccines, etc. Everybody cites their favorite sourcepriest, bishop, lay leader, etc. but determining the truth is not so easy in the face of apparently contradictory information. One can only do the best in terms of prayerfully weighing the matter and, with a modicum or a significant amount of humility, realize the often tentative nature of the results. 

However, whether the results are absolute or tentative, the profound connection between truth and love can never be compromised. Truth without love is too often an unconvincing hammer, while love without truth is too often uselessly directionless. Love and truth are called for; both must always be present. No amount of error in a person justifies treating that person in a way that demeans the essential dignity that is theirs as sons or daughters of God. The image of God that we all bear is not effaced by error and so must always be taken into consideration. The Catechism is rather eloquent about the sinful nature of detraction and slander. Mercy, gentleness, dignity, and respect must always be present in our proclamation of the truth. If they are not, the King will not honor our attempts, because He only honors what is done His way. - Fr. Ed Fride