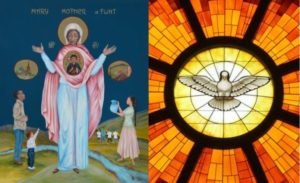 Has God placed Flint on your heart? Become an intercessor!
See our monthly prayer intention below, and consider praying the monthly Flint Novena.

Do you want to volunteer? Fill out the Flint Mission team form here!

To financially support the Catholic Community of Flint, send donations to CTK with “Flint” in the memo line OR give online to a specific CCF fund here!

For the families living in Flint: For Christian Faith, Hope and Love to be fostered in family life and in each relationship among family members.

Mary, Mother of Flint, pray for us!

Check out the Diocese of Lansing video from the last day of camp here! 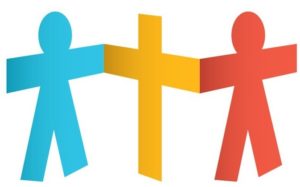 Check out the promo video for 2021 here! 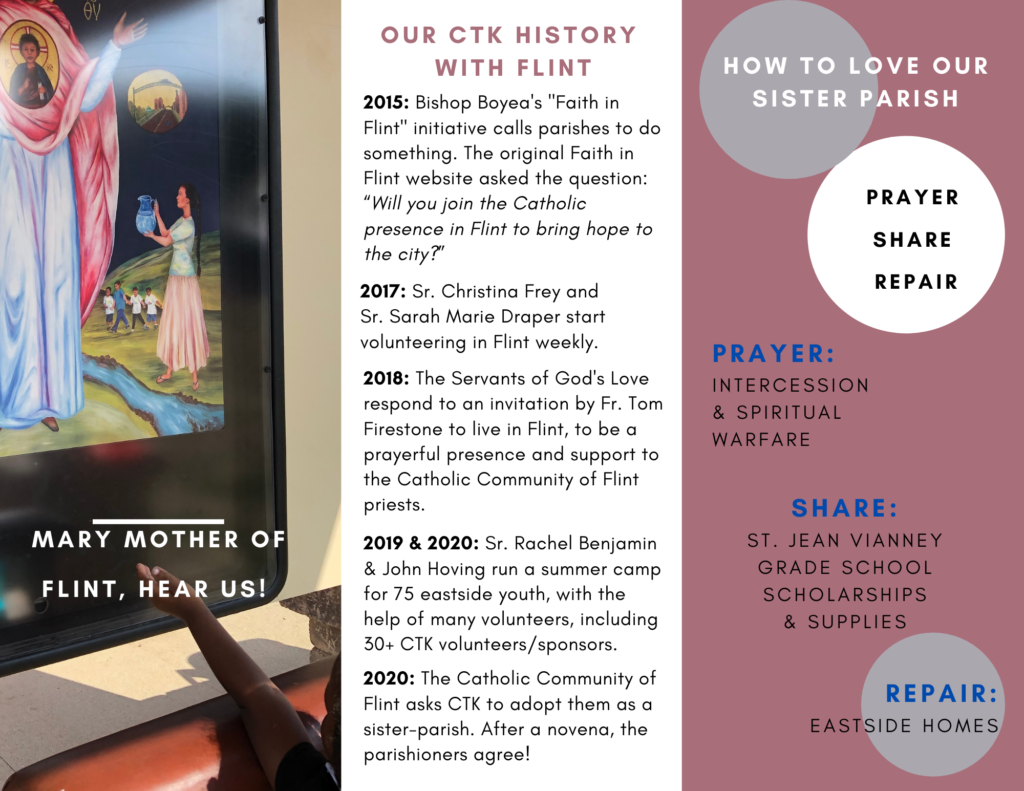 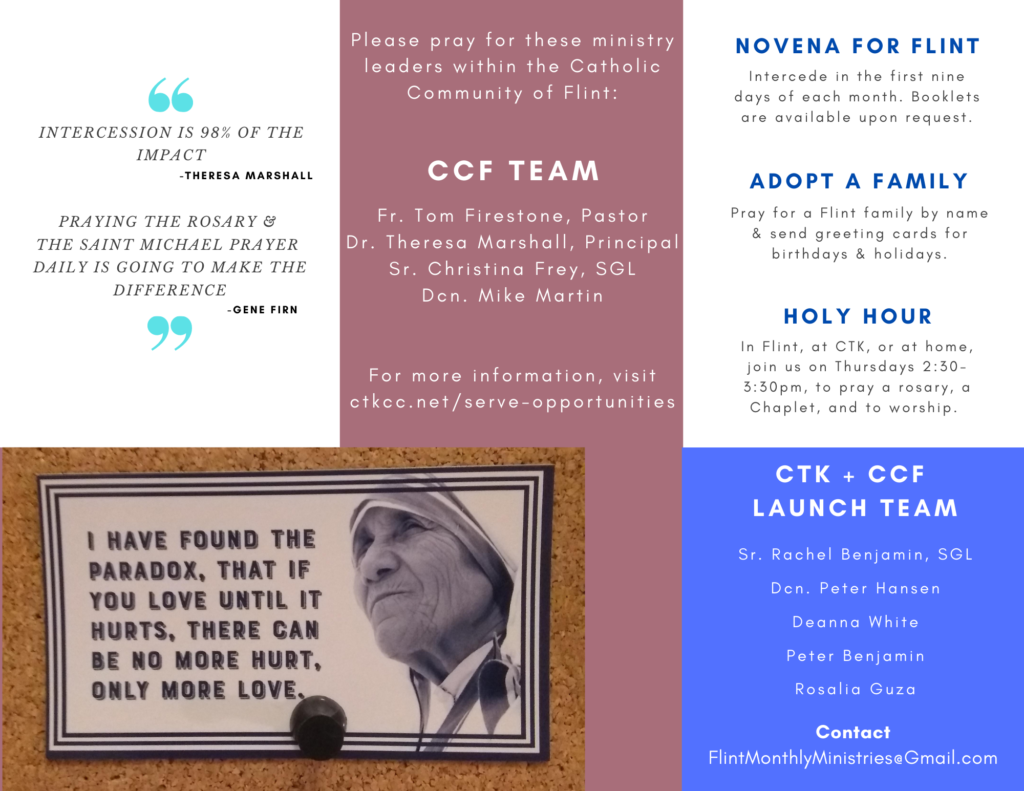 We’d love to hear from you! Contact Sister Rachel Benjamin and the CTK + CCF Launch Team at FlintMonthlyMinistries@gmail.com.

On Flint’s Eastside, the water crisis is only the latest challenge in a series of insurmountable difficulties. Our response as brothers and sisters in Christ is to befriend, provide resources, and in Jesus’ Name, foster community there. The “St Mary’s Neighborhood Project” consists in rehabilitating three abandoned homes near St. Mary’s Church, located in the midst of the Eastside area, as rent-to-own options for homeless members of our community. Rent is determined based on their situation. The extensive home repairs required will provide an opportunity for training and employment for local laborers, who are likewise being rehabilitated. Trades workers and other volunteers will assist to fully develop the homes and the culture of the neighborhood. Building homes is not a novelty; but building a real community is.

Our scope and focus make the difference. We have provided a holistic and Christian support system for several years, to serve the person as a whole person, and the entire family. Secular organizations rebuild neighborhoods that revert to shambles because they lack provision of pastoral needs. In this year of St. Joseph, we wish to support human dignity by providing homes and a Christocentric community. We hope to inspire other churches to replicate this project!

Who are we helping?

The intended audience is the precious families and individuals in our relationship-ministry outreach on Flint’s Eastside. St. Mary’s Church sits in the center of the Eastside where many blocks have more abandoned or burned down homes than those which are occupied. Our neighbors are the sole purpose and focus of our outreach. We invest time, energy, and resources into the fostering of these relationships. The personal needs of our neighbors are extreme. Corruption and dysfunction exist on every imaginable level of the social structure. The undermining of human dignity is deep seated, reaching back generations, which sadly manifests in the self-sabotage of many neighbors, who do not know their worth or potential. Yet (or rather, therefore) Jesus lives among them, and delights to bring us together!

This is arguably the most devastated area in a significantly impoverished city. Few households have both parents present. As a city, Flint ranks 15th nationally for violent crimes, with 50% of the population living below the poverty line. Given the level of depravity and suffering, compounded by the Covid pandemic, the relationship-ministry provided by the St. Mary’s outreach is truly life-saving. Often we are the only voice of truth and witness of love in their lives. We befriend anyone who receives us, regardless of religious beliefs, and welcome every willing household into the invisible boundary of “St. Mary’s Neighborhood”.

How did we get started?

A few years ago, Fr. Tom Firestone, the pastor of the Catholic Community of Flint (CCF), met with the pastoral team at St. Mary’s, which included Deacon Mike Martin. Together they felt the Lord directing them to provide transitional housing for homeless families. Then, three days later, a house was randomly donated from an entirely unaffiliated source. The owner had died and the family decided to give the house to the nearest church. A small team of locals, mostly former drug dealers who wanted to change their lives, were led by Deacon Mike to replace all of the plumbing, roofing and appliances. Then, while renovating this home, another home was donated! Clearly God was confirming this initiative as it became a reality. The first home was able to provide shelter and stability for a very poor grandmother and her four school-aged granddaughters, who could only manage $200/month for rent.

“St. Mary’s missionaries” met a very poor family who was living under a drug and prostitution house. There were three teenage boys, the dad had cancer, diabetes, and heart disease, and the mom had lupus. Once the second home was ready, they moved in. They agreed on a rent they can manage, of $400 a month. If they get to a position when they can manage the bills, the house will be sold to them.

The outreach has continued as it began, with small teams of volunteers walking door to door to households surrounding the Church grounds, offering to pray with folks. Trust in the “prayer walkers from St. Mary’s” has grown slowly but strongly among our neighbors. Now, our outreach includes households over a mile away, necessitating that we drive house to house for visits, and “St. Mary’s neighborhood” continues to expand. These meaningful relationships demand a high level of commitment to address the ongoing material and spiritual needs and challenges our neighbors face. This project is a direct response to that demand.

We have been blessed with the opportunity to experience, in real time, one of the many impacts this will have on the Church. The family with three teenagers has drawn closer to the Church. The dad returned to practicing his Catholic faith, two sons were baptized, and now want to start RCIA. Additionally, the boys give back by volunteering at the St. Mary’s food pantry and helping Deacon with heavy lifting when needed. The mom is a regular member of Sister Christina’s women’s group at St. Mary’s, and has embraced others as neighbors. The love this family has for Christ and the Church spreads organically. Their candle has been lit and it is lighting others!