“Master, to whom shall we go?” 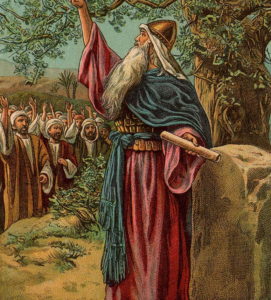 The disciples were faced here with a significant challenge. The Lord Jesus had just proclaimed His teaching about His Real Presence in the Eucharist in a way that many of the disciples found it impossible to accept: that He would give them His flesh to eat. The response of many of them was one of the saddest moments recounted in the New Testament: “many of His disciples returned to their former way of life.”

The battle against pride is the most ancient dimension of the spiritual warfare that we live in. It was how the devil ensnared our first parents: by appealing to their pride, i.e., their ability to be autonomous as soon as they ate the forbidden fruit. “You will be like God” with the presumption that the more you are like Him, the less, in fact, you need Him.

Those who sat in judgment on the words of the Lord Jesus and found them wanting returned “to their former way of life.” When I hear that phrase, I think of what a disaster my life would be if I walked away from the Lord Jesus and returned to my “former way of life.” Not that it was all that bad in terms of morality, etc., but the purposelessness of it all, no answer to the questions, “Why am I here, what is the point, where am I going?” These are the fundamental existential questions that every human being must face. How does one answer them without the Lord Jesus? Many today are attempting to find answers for them. Many also simply presume that there are no real answers, so “eat, drink, and be merry, for tomorrow we may die.” The answers can only truly be found in the Lord Jesus, as St. Augustine so famously pointed out: “You have made us for Yourself, and our hearts won’t rest until they rest in You.”

I spent a fair amount of time investigating different philosophies, etc., trying to answer those questions. I even hid for a while behind the mask of scientism, which believes that those answers cannot be reached scientifically, so they have no meaning and should just be ignored. It was a singularly unsatisfying perspective. Unfortunately for the adherents of scientism, the world is filled with wonder, mystery, and miracle, and confining one’s self to an attitude that denies all of that leads to a sterile universe without ultimate answers.

TheLord Jesus proclaimed a mystery: that of His Body and Blood. Those who accepted His Words and trusted in Him were ultimately given this incomparable gift of receiving Him, the Bread from Heaven, the Gift that our hearts long for! Those who rejected it, sadly, condemned themselves to a much more sterile universe. There are significant dimensions to the Kingdom of God that we will never fully grasp, and that should fill us with wonder and humility. The alternative is choosing pride and autonomy, trapped in a universe of “our own making,” ultimately devoid of the answers our souls most desire and the wonder our hearts long for. But as with that crowd, it is always our choice. He constantly sets before us death or life; He constantly stands at the door and knocks. He then, while constantly inviting us, leaves us free to choose. The King loves us beyond words, beyond measure; let us choose to respond to Him! – Fr. Ed Fride